Jump to this Video »
The Formation of Fossil Fuels - Earth: The Operators' Manual
https://www.youtube.com/watch?v=_8VqWKZIPrM 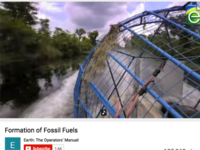 This video segment from the Earth Operators Manual summarizes how fossil fuels are made, provides a comparison of how long it takes to store energy in coal, oil and natural gas, and discusses how fast we're using them.

US Coasts
See more for this region.

MS-ESS3.A1:Humans depend on Earth’s land, ocean, atmosphere, and biosphere for many different resources. Minerals, fresh water, and biosphere resources are limited, and many are not renewable or replaceable over human lifetimes. These resources are distributed unevenly around the planet as a result of past geologic processes.

MS-PS3.A4:The term “heat” as used in everyday language refers both to thermal energy (the motion of atoms or molecules within a substance) and the transfer of that thermal energy from one object to another. In science, heat is used only for this second meaning; it refers to the energy transferred due to the temperature difference between two objects.