Jump to this Video »
A Subsistence Culture Impacted by Climate Change
http://www.pbslearningmedia.org/resource/ean08.sci.life.eco.athabaskan/ 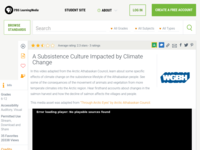 A short video on how changing climate is impacting the ecosystem and thereby impacting traditional lifestyles of the Athabaskan people of Alaska.

Short video was adapted from "Through Arctic Eyes" by Arctic Athabaskan Council, which can be found at https://www.youtube.com/watch?v=e-eghbcw_GQ