Jump to this Video »
From Pond Scum to Power
http://www.pbs.org/wgbh/nova/tech/algae-biodiesel.html 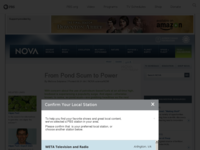 This animated slideshow introduces biodiesel as a fuel alternative. With concern about the use of petroleum-based fuels at an all-time high, biodiesel is experiencing a popularity surge. And algae—otherwise known to some as pond scum— are grabbing headlines as the next potential biodiesel superstar. But how and why do algae make oil? And why do they make so much of it? In this audio slide show, U.C. Berkeley's Kris Niyogi describes the process and its potential. Learn more about Teaching Climate Literacy and Energy Awareness»

HS-LS1.C2: The sugar molecules thus formed contain carbon, hydrogen, and oxygen: their hydrocarbon backbones are used to make amino acids and other carbon-based molecules that can be assembled into larger molecules (such as proteins or DNA), used for example to form new cells. (