Jump to this Video »
CO2 in the Ice Core Record
https://www.youtube.com/watch?v=oHzADl-XID8 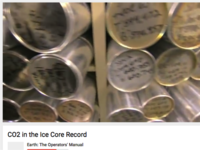