Jump to this Video »
CO2 & the Atmosphere
https://www.youtube.com/watch?v=E9eGzPxA1Dg 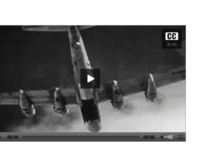 This video is narrated by climate scientist Richard Alley. It examines studies US Air Force conducted over 50 years ago on the warming effects of CO2 in the atmosphere and how that could impact missile warfare. The video then focuses on the Franz Josef glacier in New Zealand; the glacier is used to demonstrate a glacier's formation, depth of snow fall in the past, and understand atmospheric gases and composition during the last Ice Age. Supplemental resources are available through the website.