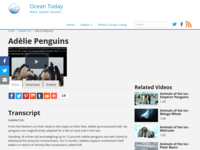 A short video that discusses how changing climate is affecting the population of Adélie penguins.

HS-LS4.C5: Species become extinct because they can no longer survive and reproduce in their altered environment. If members cannot adjust to change that is too fast or drastic, the opportunity for the species’ evolution is lost.