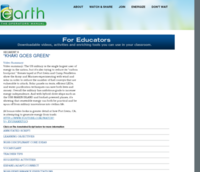 This video segment highlights how the U.S. military is the single largest user of energy in the nation, but it is also trying to reduce its carbon bootprint. Scenes taped at Fort Irwin and Camp Pendleton show the Army and Marines experimenting with wind and solar in order to reduce the number of fuel convoys that are vulnerable to attack.