Jump to this Video »
Texas: Wind and Efficiency - Earth: The Operators' Manual
https://www.youtube.com/watch?v=xar9zR6e634 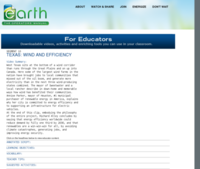 MS-PS3.A1: Motion energy is properly called kinetic energy; it is proportional to the mass of the moving object and grows with the square of its speed.

HS-PS3.B3: Mathematical expressions, which quantify how the stored energy in a system depends on its configuration (e.g. relative positions of charged particles, compression of a spring) and how kinetic energy depends on mass and speed, allow the concept of conservation of energy to be used to predict and describe system behavior.

US Great Plains
Find more resources for this region.