This activity is part of the On the Cutting Edge Peer Reviewed Teaching Activities collection.

This activity has received positive reviews in a peer review process involving five review categories. The five categories included in the process are

For more information about the peer review process itself, please see https://serc.carleton.edu/teachearth/activity_review.html.

This page presents a strategy for addressing a common climate misconception in the classroom, derived from The Debunking Handbook, by John Cook and Stephan Lewandowsky. This material was created by faculty as part of the CLEAN Climate Communications Workshop, held in April, 2012.

Rebutting the Myth: Consensus on the Causes of Climate Change


Start with the Fact:

Show the background of this topic and the myth

Hide
The climate myth: Scientists don't agree on the causes of global warming

The actual climate science: 97% of practicing climate scientists agree that human activities are the cause of recent climate change. (Doran and Zimmermann, 2009; Litcher, 2008)

The following 4-step process can be used to debunk the myth regarding scientific consensus on climate change:

1. Begin the myth debunking by writing a headline that clearly states the core scientific fact.

97% of practicing climate scientists agree that human activities are the cause of recent climate change (Doran and Zimmermann, 2009; Litcher, 2008).

2. Present a reinforcement of the core fact that is brief, to the point, and is easily understandable by your target audience. Pair the explanation with a graphic. 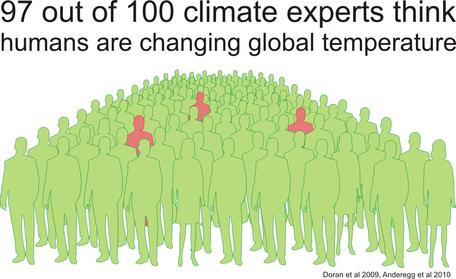 Provenance: Data from Doran et al, (2009) and Anderegg et al (2010). Graphic from Skeptical Science (http://www.skepticalscience.com/graphics.php?g=1), under a Creative Commons Attribution 3.0 Unported License.
Reuse: This item is offered under a Creative Commons Attribution-NonCommercial-ShareAlike license http://creativecommons.org/licenses/by-nc-sa/3.0/ You may reuse this item for non-commercial purposes as long as you provide attribution and offer any derivative works under a similar license.
Recent empirical work proves our core scientific statement.A 2009 survey was conducted by Doran and Zimmerman. Seventy-nine climate scientists responded to these two questions:

Also, Harris Interactive surveyed 489 members of the American Meteorological Society and American Geophysical Union in 2007. According to Litcher (2008) 97% of responding climate scientists believe that average global temperatures have increased, compared to only 60% in 1991.

Furthermore, Oreskes (2004) conducted a qualitative analysis of 928 abstracts of scientific journal articles, published between 1993 and 2003. Seventy-five percent either explicitly or implicitly accepted that the most recent IPCC report expresses a clear consensus that human activities are affecting the Earth's climate. The remaining 25% dealt with methods or paleoclimate topics, and took no position on the subject. According to Oreskes, none of the papers disagreed with the consensus view.

3. Give an explicit warning that warns the reader that misinformation is coming and then state the myth.

Some will have you believe that there isn't a consensus among scientists, that the science is still in doubt. One technique is the use of people with science degrees but who are not climate scientists to back their bogus claims. Various petitions and letters have included signatures of scientists who claim recent climate change is not human-caused.

4. Use a closing statement that debunks the myth and reinforces the core fact.

Analogies may help here: If your students had a medical problem would they seek medical expertise from someone who is a practicing specialist in the field or would they make life-changing decisions based on advice from someone in a different field?

Refer to information literacy standards for higher education here: http://www.ala.org/acrl/standards/informationliteracycompetency. These include assessments and standards for performance.

Over 31,000 scientists signed the OISM Petition Project, a synopsis of the issue by Skeptical Science

Qualifications of Signers from the OISM Petition Project website