This activity is part of the On the Cutting Edge Peer Reviewed Teaching Activities collection.

This activity has received positive reviews in a peer review process involving five review categories. The five categories included in the process are

For more information about the peer review process itself, please see https://serc.carleton.edu/teachearth/activity_review.html.

This page presents a strategy for addressing a common climate misconception in the classroom, derived from The Debunking Handbook, by John Cook and Stephan Lewandowsky. This material was created by faculty as part of the CLEAN Climate Communications Workshop, held in April, 2012.

Start with the fact:

The oceans do not have infinite heat capacity

The climate science:
The ocean is by far the Earth's greatest reservoir for heat, storing 80% of all the energy in the Earth's climate. As a result of its vastness and heat capacity, it accumulates a large proportion of the increased heat caused by anthropogenic global warming. The large thermal inertia of the ocean delays the impacts of global warming, presenting society with a chance to mitigate climate change in the present day while committing the Earth to ongoing warming for decades to come (see Science Daily, 2010 & 2012 references below).

The present day effects of ocean warming and increased CO2 levels include:

A persistent myth is that the oceans have an infinite capacity to store excess heat without ill effects for the planet.

Show example of this myth

Hide
'Because of the volume and heat capacity of the oceans, they have a vast capacity to store excess heat, in essence creating a buffer that protects the planet from potential ill-effects resulting from global warming. (Segalstad, 1996 )

However, the ocean's capacity to buffer CO2 to the atmosphere is limited, and the negative effects of excess CO2 in the atmosphere will continue to increase as atmospheric CO2 concentrations rise.

The following 4-step process can be used to debunk the myth about ocean heat capacity:

1. Begin the myth debunking by writing a headline that clearly states the core scientific fact.

Warming of the ocean has negative effects on marine and non-marine ecosystems, leads to sea-level rise, and dramatically impacts regional and global climate patterns.

2. Present a reinforcement of the core fact that is brief, to the point, and is easily understandable by your target audience. Pair the explanation with a graphic. 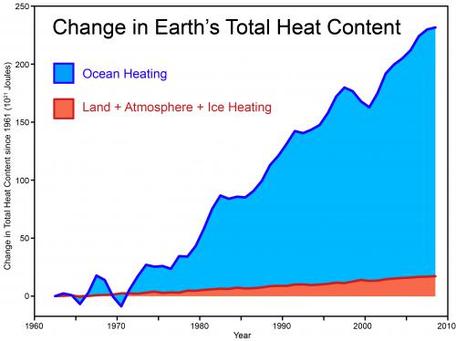 Provenance: Image from Church et al 2011, with data from Neil White from the CSIRO. Licensed by Skeptical Science under a Creative Commons Attribution 3.0 Unported License.
Reuse: This item is offered under a Creative Commons Attribution-NonCommercial-ShareAlike license http://creativecommons.org/licenses/by-nc-sa/3.0/ You may reuse this item for non-commercial purposes as long as you provide attribution and offer any derivative works under a similar license.
Because the oceans cover about 70% of Earth's surface, and because water has a much higher heat capacity than most other surfaces on Earth, they store a great amount of incoming energy from the sun. This large heat reservoir includes surface waters and heat that is transferred by radiation, conduction, and convection deep into the ocean to depths of several kilometers. This leads to thermal expansion over time, as well as depletion of ice cover, which allows for increased heat absorption in the polar seas as ice cover decreases. Oceans also absorb some (but not all) of the CO2 in the atmosphere, which decreases pH in the oceans and increases acidity.

3. Give an explicit warning that warns the reader that misinformation is coming and then state the myth.

4. Use a closing statement that debunks the myth and reinforces the core fact.

However, the ocean's ability to serve as a buffer, absorbing excess heat and CO2 from the atmosphere, is not limitless. The negative effects of warming oceans continue to grow as atmospheric concentration of CO2 continues to rise.

Context: In an Earth Systems Science course, a discussion of this misconception can serve as a connecting and unifying topic after learning about the hydrological and the carbon cycles. Students can use their knowledge of water properties and carbon exchange to analyze a situation where CO2 increases. They can diagram the effects, and use a concept map or flow chart to explore the effects of increased CO2 in each of the cycles. Once they have charted the effects (decreased salinity, increased sea level, increased acidification, etc.), the myth can be introduced. At that point, students can use the products they have created to refute the myth and explain why it is false. This process avoids the familiarity backfire effect because the myth is not introduced until the students are familiar and comfortable with the facts.

Have students diagram the carbon cycle and explain the factors that influence the ocean's CO2 exchange with the atmosphere.