Jump to this Video »
Tuvalu - Islands on the frontline of climate change
https://vimeo.com/4997847 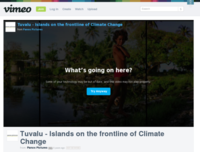 This narrated slideshow describes the impact of sea level rise on Tuvalu, one of the low-lying island nations in the South Pacific. As the frequency and intensity of floods and cyclones increases, the island is shrinking and saltwater intrusion is affecting local food production on the plantations. As a result, many residents are moving off the island to New Zealand, where they face major cultural changes. Learn more about Teaching Climate Literacy and Energy Awareness»