NBC News, Windows to the Universe 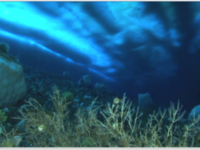 This video addresses acidification of the ocean and the ecological and economic implications of the resulting pH change on marine life. It includes information about how ocean acidification resulting from increased absorption of CO2 from the atmosphere is affecting ocean species such as sea urchins and oysters. Scientists from the University of California at Santa Barbara discuss their experiments with sea creatures in acidic sea water. There is an associated lesson plan and classroom activity that has students test the effects of CO2 on water pH.

Windows to the Universe resource: http://www.windows2universe.org/earth/changing_planet/ocean_acidification_intro.html
Jump to this Video »