Jump to this Activity »
Graphing the Extent of Sea Ice in the Arctic and Antarctic
https://scied.ucar.edu/activity/graphing-sea-ice-extent-arctic-antarctic

Randy Russell, Windows to the Universe 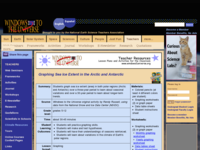 MS-P4.7: Analyze and interpret data to determine similarities and differences in findings.

Patterns, Cause and effect, Scale, Proportion and Quantity, Energy and Matter, Stability and Change
See Details »

hide
Patterns, Cause and effect, Scale, Proportion and Quantity, Energy and Matter, Stability and Change

HS-P4.5: Evaluate the impact of new data on a working explanation and/or model of a proposed process or system.

Activity can possibly be a homework assignment at high school level, but should be done in class at the middle school level.