The CLEAN team developed a set of terms that define climate science, climate change, and energy awareness. The idea of these terms, or "vocabularies" is to allow users to easily search the collection of activities to hone in on their specific areas of interest. Each teaching resource is tagged with the appropriate vocabularies so that the collection can be browsed across various subject areas. 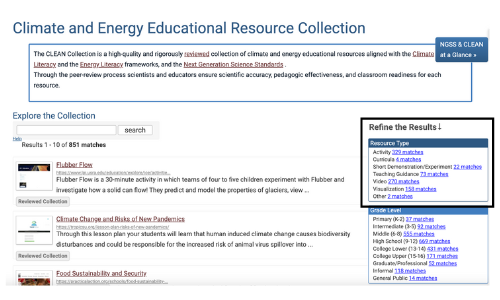 The development of these vocabularies was informed by:

The vocabularies have 7 top-level terms which are defined by sub-level terms, 43 secondary and 40 tertiary level terms. In some cases additional explanation about the meaning of the vocabularies is provided in a "mouse-over" function and is displayed below in parenthesis.

The vocabularies were tested with user groups on two different occasions with 47 test subjects. Results of the usability testing helped to refine the terms to ensure that they were intuitive and that they sufficiently spanned the subject areas within climate and energy.