Jump to this Simulation/Interactive »
If All the Ice Melted
https://www.nationalgeographic.com/magazine/2013/09/rising-seas-ice-melt-new-shoreline-maps/ 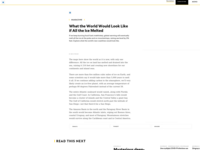 This visualization is a collection of maps, by continent, that project the impact on coastlines of a 216-foot rise in sea level, which is assumed to be the result of melting all the land ice on Earth. Learn more about Teaching Climate Literacy and Energy Awareness»

Next Generation Science Standards See how this Simulation/Interactive supports:

MS-PS4.B2:The path that light travels can be traced as straight lines, except at surfaces between different transparent materials (e.g., air and water, air and glass) where the light path bends.

MS-P1.4:Ask questions to clarify and/or refine a model, an explanation, or an engineering problem.

HS-P1.4:ask questions to clarify and refine a model, an explanation, or an engineering problem