Jump to this Static Visualization »
What causes the sea level to change?
http://www.grida.no/graphicslib/detail/causes-of-sea-level-rise-from-climate-change_d0cf 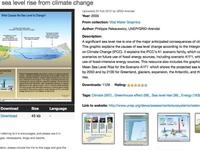 This visualization explains in simple and easy-to-understand visuals the causes of sea-level change.

MS-ESS2.C2:The complex patterns of the changes and the movement of water in the atmosphere, determined by winds, landforms, and ocean temperatures and currents, are major determinants of local weather patterns.

MS-ESS2.C3:Global movements of water and its changes in form are propelled by sunlight and gravity.

MS-PS1.A6:The changes of state that occur with variations in temperature or pressure can be described and predicted using these models of matter.

MS-PS3.B2:The amount of energy transfer needed to change the temperature of a matter sample by a given amount depends on the nature of the matter, the size of the sample, and the environment.

MS-C7.3:Stability might be disturbed either by sudden events or gradual changes that accumulate over time.

MS-C7.4:Systems in dynamic equilibrium are stable due to a balance of feedback mechanisms.