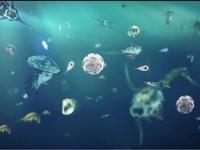 This short video is an excerpt from the longer video Acid Test: The Global Challenge of Ocean Acidification, produced by the National Resources Defense Council (NRDC). This short version summarizes the science of ocean acidification as well as the social implications.

MS-PS1.B1:Substances react chemically in characteristic ways. In a chemical process, the atoms that make up the original substances are regrouped into different molecules, and these new substances have different properties from those of the reactants.

HS-PS1.B1:Chemical processes, their rates, and whether or not energy is stored or released can be understood in terms of the collisions of molecules and the rearrangements of atoms into new molecules, with consequent changes in the sum of all bond energies in the set of molecules that are matched by changes in kinetic energy.