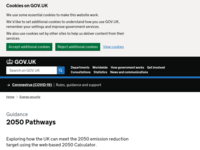 This interactive addresses the question if we can reduce CO2 emissions by 20% of 1990 levels and help avoid dangerous climate change? Users of this interactive can manipulate changes to various sources and uses (supply and demand) of energy with the goal of reducing C02 emissions in Great Britain by 80% in the year 2050. Learn more about Teaching Climate Literacy and Energy Awareness»

HS-ESS3-1: Construct an explanation based on evidence for how the availability of natural resources, occurrence of natural hazards, and changes in climate have influenced human activity.

HS-ESS3-3: Create a computational simulation to illustrate the relationships among management of natural resources, the sustainability of human populations, and biodiversity.

HS-ESS3-4: Evaluate or refine a technological solution that reduces impacts of human activities on natural systems.

HS-PS4-5: Communicate technical information about how some technological devices use the principles of wave behavior and wave interactions with matter to transmit and capture information and energy

HS-ETS1.B2: Both physical models and computers can be used in various ways to aid in the engineering design process. Computers are useful for a variety of purposes, such as running simulations to test different ways of solving a problem or to see which one is most efficient or economical; and in making a persuasive presentation to a client about how a given design will meet his or her needs.

HS-C4.1: Systems can be designed to do specific tasks.

HS-P2.5: Develop a complex model that allows for manipulation and testing of a proposed process or system.

HS-P3.1: Plan an investigation or test a design individually and collaboratively to produce data to serve as the basis for evidence as part of building and revising models, supporting explanations for phenomena, or testing solutions to problems. Consider possible confounding variables or effects and evaluate the investigation’s design to ensure variables are controlled.

HS-P4.6: Analyze data to identify design features or characteristics of the components of a proposed process or system to optimize it relative to criteria for success.