Jump to this Video »
Efficiency: The most important thing
http://www.switchenergyproject.com/topics/efficiency#/energy-overview-efficiency 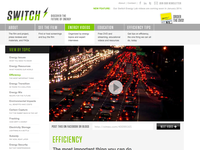 This video addresses the importance of efficiency in providing power to an increasingly large global population.

MS-ESS3.A1:Humans depend on Earth’s land, ocean, atmosphere, and biosphere for many different resources. Minerals, fresh water, and biosphere resources are limited, and many are not renewable or replaceable over human lifetimes. These resources are distributed unevenly around the planet as a result of past geologic processes.

HS-ESS3.A1:Resource availability has guided the development of human society.

HS-ETS1.A2:Humanity faces major global challenges today, such as the need for supplies of clean water and food or for energy sources that minimize pollution, which can be addressed through engineering. These global challenges also may have manifestations in local communities

HS-ETS1.B1:When evaluating solutions, it is important to take into account a range of constraints, including cost, safety, reliability, and aesthetics, and to consider social, cultural, and environmental impacts.

HS-PS3.A1:Energy is a quantitative property of a system that depends on the motion and interactions of matter and radiation within that system. That there is a single quantity called energy is due to the fact that a system’s total energy is conserved, even as, within the system, energy is continually transferred from one object to another and between its various possible forms.

HS-PS3.A3:These relationships are better understood at the microscopic scale, at which all of the different manifestations of energy can be modeled as a combination of energy associated with the motion of particles and energy associated with the configuration (relative position of the particles). In some cases the relative position energy can be thought of as stored in fields (which mediate interactions between particles). This last concept includes radiation, a phenomenon in which energy stored in fields moves across space.

HS-PS3.B1:Conservation of energy means that the total change of energy in any system is always equal to the total energy transferred into or out of the system.

HS-PS3.B4:The availability of energy limits what can occur in any system.