Jump to this Video »
The Second Solution: Riparian Restoration
http://vimeo.com/27906513 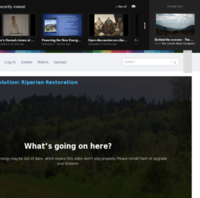 This video illustrates how one community developed and implemented a sustainable solution to help keep stream water cool enough for healthy fish. Their solution has the added benefit of removing CO2 from the atmosphere.

US Northwest
See more for this region.

MS-ESS3.C2:Typically as human populations and per-capita consumption of natural resources increase, so do the negative impacts on Earth unless the activities and technologies involved are engineered otherwise.

MS-LS2.A1:Organisms, and populations of organisms, are dependent on their environmental interactions both with other living things and with nonliving factors.

HS-LS2.B1:Photosynthesis and cellular respiration (including anaerobic processes) provide most of the energy for life processes.

HS-LS2.B2:Plants or algae form the lowest level of the food web. At each link upward in a food web, only a small fraction of the matter consumed at the lower level is transferred upward, to produce growth and release energy in cellular respiration at the higher level. Given this inefficiency, there are generally fewer organisms at higher levels of a food web. Some matter reacts to release energy for life functions, some matter is stored in newly made structures, and much is discarded. The chemical elements that make up the molecules of organisms pass through food webs and into and out of the atmosphere and soil, and they are combined and recombined in different ways. At each link in an ecosystem, matter and energy are conserved.