Jump to this Video »
Too Much Carbon Dioxide
http://planetnutshell.com/project/episode-4-too-much-carbon-dioxide/ 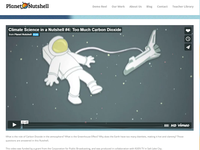 This short animated video provides a general overview of the atmosphere, carbon dioxide, and the greenhouse effect.