Jump to this Simulation/Interactive »
Climate Change and Human Health
http://www.pbslearningmedia.org/resource/envh10.sci.life.eco.cchealth/ 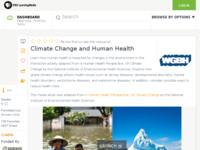 Cause and effect, Stability and Change
See Details »

hide
Cause and effect, Stability and Change

HS-C2.3: Systems can be designed to cause a desired effect.