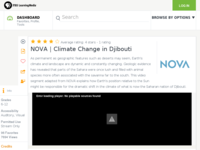 This short video, adapted from NOVA, explains how Earth's position relative to the Sun might be responsible for the dramatic shift in the climate of what is now the Saharan nation of Djibouti.