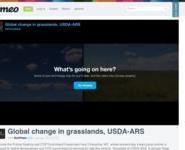 This video features the Prairie Heating and CO2 Enrichment Experiment near Cheyenne WY, where scientists expose mixed-grass prairie to higher temperatures and CO2 concentrations to study impacts on the prairie for late in this century.