Jump to this Video »
China: In With the New
https://www.youtube.com/watch?v=8yKGoIFSJ3Q 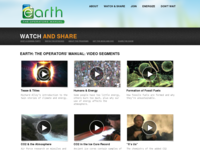 In this video clip from Earth: The Operators' Manual, host Richard Alley discusses China's efforts to develop clean energy technologies and to reduce CO2 in the atmosphere, by building coal plants using CO2 sequestration technology. (scroll down page for video)