Jump to this Animation »
Inside a Solar Cell
http://www.pbslearningmedia.org/resource/ate10.sci.phys.energy.solarcell/ 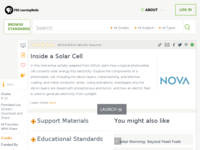 This set of six interactive slides showcases how a typical photovoltaic cell converts solar energy into electricity. Explore the components of a photovoltaic cell, including the silicon layers, metal backing, antireflective coating, and metal conductor strips. Using animations, investigate why the silicon layers are doped with phosphorous and boron, and how an electric field is used to generate electricity from sunlight. Learn more about Teaching Climate Literacy and Energy Awareness»

Next Generation Science Standards See how this Animation supports:

MS-PS3.B2:The amount of energy transfer needed to change the temperature of a matter sample by a given amount depends on the nature of the matter, the size of the sample, and the environment.

MS-C5.1:Matter is conserved because atoms are conserved in physical and chemical processes.

HS-PS3.B4:The availability of energy limits what can occur in any system.

HS-PS4.B3:Photoelectric materials emit electrons when they absorb light of a high-enough frequency