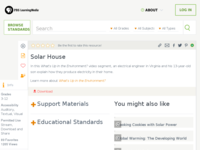 This video segment from 'What's Up in the Environment,' shares how an entire home can be constructed using green energy sources (solar and geothermal energy). Video is narrated by young boy whose father is the chief engineer on the project.