Jump to this Video »
Studying Global Warming in Biosphere 2
http://www.pbslearningmedia.org/resource/wnet08.sci.life.oate.wnetglobal/ 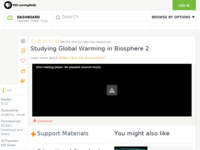 In this video segment, two students discuss the greenhouse effect and visit with research scientists at Biosphere 2 in Arizona, who research the effects of global climate change on organisms in a controlled facility. Their current research (as of 2002) focuses on the response to increased quantities of CO2 in a number of different model ecosystems.