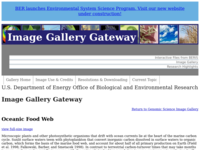 This visualization illustrates the carbon cycle throughout the oceanic zones, beginning at the surface and traveling to the deep. The concept map-like connections encourage students to link the abiotic and biotic interactions within the oceanic food web. Learn more about Teaching Climate Literacy and Energy Awareness»

This Static Visualization builds on the following concepts of Climate Literacy.