Jump to this Video »
The Right Mix of Trees
http://www.esf.edu/ecenter/eis/treemix.htm 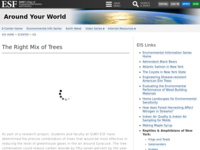 This video describes the work of scientists who are studying the precise combination of trees that would be most effective in reducing the level of greenhouse gases in the air around Syracuse, NY. This is a pilot study that will serve as a model for other urban areas.

US Northeast
Find more resources for this region.