Jump to this Video »
Arctic Tundra May Contribute to Warmer World
http://www.nsf.gov/news/news_images.jsp?cntn_id=114865&org=NSF 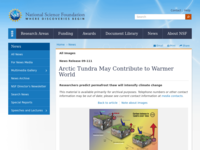 In this audio slideshow, an ecologist from the University of Florida describes the radiocarbon dating technique that scientists use to determine the amount of carbon within the permafrost of the Arctic tundra. Understanding the rate of carbon released as permafrost thaws is necessary to understand how this positive feedback mechanism is contributing to climate change that may further increase global surface temperatures.

Each of the 3 videos is about 1 minute long.

HS-ESS2.A3:The geological record shows that changes to global and regional climate can be caused by interactions among changes in the sun’s energy output or Earth’s orbit, tectonic events, ocean circulation, volcanic activity, glaciers, vegetation, and human activities. These changes can occur on a variety of time scales from sudden (e.g., volcanic ash clouds) to intermediate (ice ages) to very long-term tectonic cycles.

HS-PS1.C2:Spontaneous radioactive decays follow a characteristic exponential decay law. Nuclear lifetimes allow radiometric dating to be used to determine the ages of rocks and other materials.