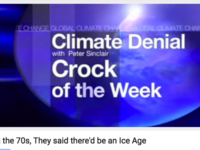 This is a video overview of the history of climate science, with the goal of debunking the idea that in the 1970s, climate scientists were predicting global cooling.

The Myth of the 1970s Global Cooling Consensus, the peer-reviewed research paper referenced in the video (free pdf)