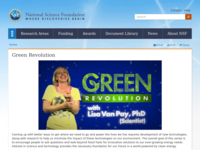 This is a series of 10 short videos, hosted by the National Science Foundation, each featuring scientists, research, and green technologies. The overall goal of this series is to encourage people to ask questions and look beyond fossil fuels for innovative solutions to our ever-growing energy needs. Learn more about Teaching Climate Literacy and Energy Awareness»