Jump to this Video »
Striking a Solar Balance
https://www.youtube.com/watch?v=Pz0JBSKRhf0 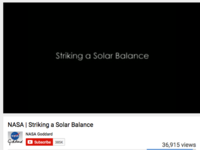 This NASA video reviews the role of the sun in driving the climate system. It uses colorful animations to illustrate Earth's energy balance and how increased greenhouse gases are creating an imbalance in the energy budget, leading to warming. The video also reviews how the NASA satellite program collects data on the sun.