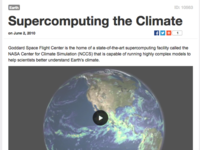 This video provides an overview of how computer models work. It explains the process of data assimilation, which is necessary to ensure that models are tied to reality. The video includes a discussion of weather models using the Goddard Earth Observing System (GEOS-5) model and climate models using the MERRA (Modern Era Retrospective Analysis for Research and Applications) technique.