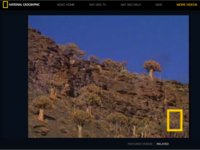 This is a National Geographic short video that briefly describes how succulent plants in the South African Karoo biome are dying off due to changes in climate.

Africa
See more for this region.