Jump to this Animation »
All About Carbon Dioxide
https://archive.epa.gov/climatechange/kids/basics/today/carbon-dioxide.html 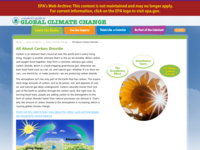 This animation depicts the carbon cycle in a fashion that is suited for younger audiences. The video discusses how carbon enters and exits the environment through both natural and human-driven ways. Learn more about Teaching Climate Literacy and Energy Awareness»

This Animation builds on the following concepts of Energy Literacy.