Jump to this Static Visualization »
Impact of sea level rise in Bangladesh
http://www.grida.no/graphicslib/detail/impact-of-sea-level-rise-in-bangladesh_e7fc 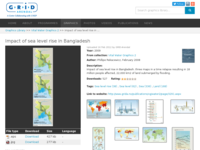 A simple three-part diagram from UNEP GRID Vital Water Graphics showing how global warming could impact coastlines and populated areas of Bangladesh with a 1 and 1.5 meter sea level rise relative to the current coastline. Learn more about Teaching Climate Literacy and Energy Awareness»

Asia
See more for this region.

Another version of this same graphic on its own page: http://www.grida.no/publications/vg/water2/page/3291.aspx. On this page you can click the image to enlarge it further.

MS-ESS2.C2:The complex patterns of the changes and the movement of water in the atmosphere, determined by winds, landforms, and ocean temperatures and currents, are major determinants of local weather patterns.

Cause and effect
See Details »

hide
Cause and effect

MS-C2.1:Relationships can be classified as causal or correlational, and correlation does not necessarily imply causation.

MS-C2.3:Phenomena may have more than one cause, and some cause and effect relationships in systems can only be described using probability.

Cause and effect
See Details »

hide
Cause and effect

HS-C2.4:Changes in systems may have various causes that may not have equal effects.