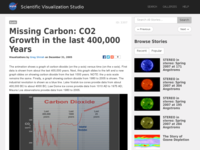 HS-ESS2-1: Develop a model to illustrate how Earth’s internal and surface processes operate at different spatial and temporal scales to form continental and ocean-floor features.

HS-ESS2-2: Analyze geoscience data to make the claim that one change to Earth's surface can create feedbacks that cause changes to other Earth systems.

HS-ESS2-7: Construct an argument based on evidence about the simultaneous coevolution of Earth’s systems and life on Earth.

Patterns, Cause and effect, Scale, Proportion and Quantity
See Details »

hide
Patterns, Cause and effect, Scale, Proportion and Quantity

There are three videos in this series, although there is no contextual information to stitch them together. http://svs.gsfc.nasa.gov/cgi-bin/search.cgi?series=211
Jump to this Animation »