Jump to this Video »
Hamster-like Pika in Peril
http://video.nationalgeographic.com/video/news/wild-chronicles/pika-in-peril-missions-wcvin?source=relatedvideo 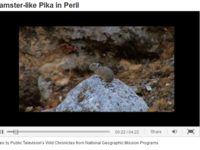 MS-LS2.A2:In any ecosystem, organisms and populations with similar requirements for food, water, oxygen, or other resources may compete with each other for limited resources, access to which consequently constrains their growth and reproduction.

HS-LS4.C5:Species become extinct because they can no longer survive and reproduce in their altered environment. If members cannot adjust to change that is too fast or drastic, the opportunity for the species’ evolution is lost.