Jump to this Animation »
The Thermohaline Circulation - The Great Ocean Conveyor Belt
https://gpm.nasa.gov/education/videos/thermohaline-circulation-great-ocean-conveyor-belt 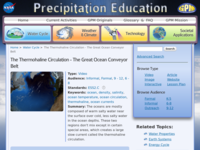 This NASA animation depicts thermohaline circulation in the ocean and how it relates to salinity and water density. It illustrates the sinking of water in the cold, dense ocean near Iceland and Greenland. The surface of the ocean then fades away and the animation pulls back to show the global thermohaline circulation system. Learn more about Teaching Climate Literacy and Energy Awareness»