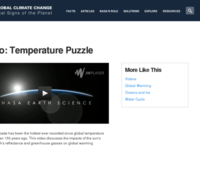 This NASA video discusses the impacts of the sun's energy, Earth's reflectance, and greenhouse gases on the Earth System.

Video is appropriate for in-class use in middle grades or as part of a homework assignment for high school students.

HS-ESS3.D2:Through computer simulations and other studies, important discoveries are still being made about how the ocean, the atmosphere, and the biosphere interact and are modified in response to human activities.