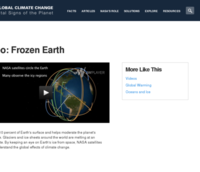 This video montage of spectacular NASA satellite images set to music shows different types of ice and ice features as well as descriptions of satellite-based measurements of ice cover. Text captioning describes how global ice cover is changing, and how this is measured.

HS-ESS1.B2:Cyclical changes in the shape of Earth’s orbit around the sun, together with changes in the tilt of the planet’s axis of rotation, both occurring over hundreds of thousands of years, have altered the intensity and distribution of sunlight falling on the earth. These phenomena cause a cycle of ice ages and other gradual climate changes.