Jump to this Activity »
Climate History and the Cryosphere
https://serc.carleton.edu/earthlabs/cryosphere/4.html 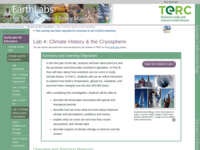 MS-ESS3-5: Ask questions to clarify evidence of the factors that have caused the rise in global temperatures over the past century.

MS-ESS3.B1: Mapping the history of natural hazards in a region, combined with an understanding of related geologic forces can help forecast the locations and likelihoods of future events.

Systems and System Models, Energy and Matter, Stability and Change, Patterns, Cause and effect
See Details »

hide
Systems and System Models, Energy and Matter, Stability and Change, Patterns, Cause and effect

MS-P2.5: Develop and/or use a model to predict and/or describe phenomena.

MS-P3.2: Conduct an investigation and/or evaluate and/or revise the experimental design to produce data to serve as the basis for evidence that meet the goals of the investigation

MS-P7: Engaging in Argument from Evidence

MS-P8.2: Integrate qualitative and/or quantitative scientific and/or technical information in written text with that contained in media and visual displays to clarify claims and findings.

HS-ESS1.B1: Kepler’s laws describe common features of the motions of orbiting objects, including their elliptical paths around the sun. Orbits may change due to the gravitational effects from, or collisions with, other objects in the solar system.

HS-P7: Engaging in Argument from Evidence

HS-P8.2: Compare, integrate and evaluate sources of information presented in different media or formats (e.g., visually, quantitatively) as well as in words in order to address a scientific question or solve a problem.

http://serc.carleton.edu/earthlabs/cryosphere/lab_overviews.html
Jump to this Activity »