Jump to this Activity »
Climate Change and Arctic Ecosystems
https://apps.iclimate.org/ccc/Files/cc_arctic.pdf 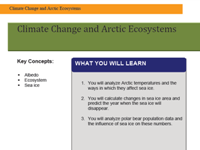 HS-LS2-2: Use mathematical representations to support and revise explanations based on evidence about factors affecting biodiversity and populations in ecosystems of different scales.