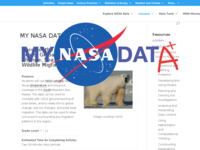 In this activity students use NASA satellite data to study changes in temperature and snow-ice coverage in the South Beaufort Sea, Alaska. They will then correlate the data with USGS ground tracking of polar bears and relate their findings to global change, sea ice changes, and polar bear migration and survival.

MS-C1.4:Graphs, charts, and images can be used to identify patterns in data.

MS-P3.2:Conduct an investigation and/or evaluate and/or revise the experimental design to produce data to serve as the basis for evidence that meet the goals of the investigation

MS-P4.4:Analyze and interpret data to provide evidence for phenomena.

MS-P4.7:Analyze and interpret data to determine similarities and differences in findings.

MS-P6.1:Construct an explanation that includes qualitative or quantitative relationships between variables that predict(s) and/or describe(s) phenomena.

MS-P6.4:Apply scientific ideas, principles, and/or evidence to construct, revise and/or use an explanation for real- world phenomena, examples, or events.

MS-P7.3:Construct, use, and/or present an oral and written argument supported by empirical evidence and scientific reasoning to support or refute an explanation or a model for a phenomenon or a solution to a problem.

MS-P8.5:Communicate scientific and/or technical information (e.g. about a proposed object, tool, process, system) in writing and/or through oral presentations.

HS-LS2-6: Evaluate the claims, evidence, and reasoning that the complex interactions in ecosystems maintain relatively consistent numbers and types of organisms in stable conditions, but changing conditions may result in a new ecosystem.

Patterns, Cause and effect, Scale, Proportion and Quantity, Energy and Matter, Stability and Change
See Details »

hide
Patterns, Cause and effect, Scale, Proportion and Quantity, Energy and Matter, Stability and Change

HS-C3.3:Patterns observable at one scale may not be observable or exist at other scales.

HS-C3.5:Algebraic thinking is used to examine scientific data and predict the effect of a change in one variable on another (e.g., linear growth vs. exponential growth).

HS-P2.3:Develop, revise, and/or use a model based on evidence to illustrate and/or predict the relationships between systems or between components of a system

HS-P4.2:Apply concepts of statistics and probability (including determining function fits to data, slope, intercept, and correlation coefficient for linear fits) to scientific and engineering questions and problems, using digital tools when feasible.

HS-P5.2:Use mathematical, computational, and/or algorithmic representations of phenomena or design solutions to describe and/or support claims and/or explanations.

HS-P6.4:Apply scientific reasoning, theory, and/or models to link evidence to the claims to assess the extent to which the reasoning and data support the explanation or conclusion.

HS-P7.4:Construct, use, and/or present an oral and written argument or counter-arguments based on data and evidence.

HS-P8.5:Communicate scientific and/or technical information or ideas (e.g. about phenomena and/or the process of development and the design and performance of a proposed process or system) in multiple formats (i.e., orally, graphically, textually, mathematically).