Jump to this Activity »
My Angle on Cooling: Effects of Distance and Inclination
http://sciencenetlinks.com/lessons/my-angle-on-cooling-effects-of-distance-and-inclination/ 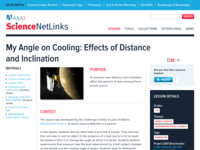 In this hands-on lesson, students measure the effect of distance and inclination on the amount of heat felt by an object and apply this experiment to building an understanding of seasonality. In Part 1, the students set up two thermometers at different distances from a light bulb and record their temperatures to determine how distance from a heat source affects temperature. In Part 2, students construct a device designed to measure the temperature as a function of viewing angle toward the Sun by placing a thermometer inside a black construction paper sleeve, and placing the device at different angles toward the Sun. They then explain how distance and inclination affect heat and identify situations where these concepts apply, such as the seasons on Earth and the NASA Mercury MESSENGER mission.

hide
Systems and System Models, Energy and Matter, Patterns, Cause and effect, Scale, Proportion and Quantity

MS-C2.1: Relationships can be classified as causal or correlational, and correlation does not necessarily imply causation.

MS-P3.1: Plan an investigation individually and collaboratively, and in the design: identify independent and dependent variables and controls, what tools are needed to do the gathering, how measurements will be recorded, and how many data are needed to support a claim.

MS-P3.2: Conduct an investigation and/or evaluate and/or revise the experimental design to produce data to serve as the basis for evidence that meet the goals of the investigation

MS-P8.4: Evaluate data, hypotheses, and/or conclusions in scientific and technical texts in light of competing information or accounts.