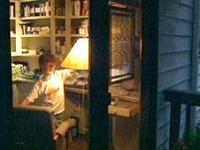 This short video surveys the different current and potential sources of energy - both non-renewable and renewable. It provides some discussion of the pros and cons of the different sources and explains how they are used to produce energy that people can use.